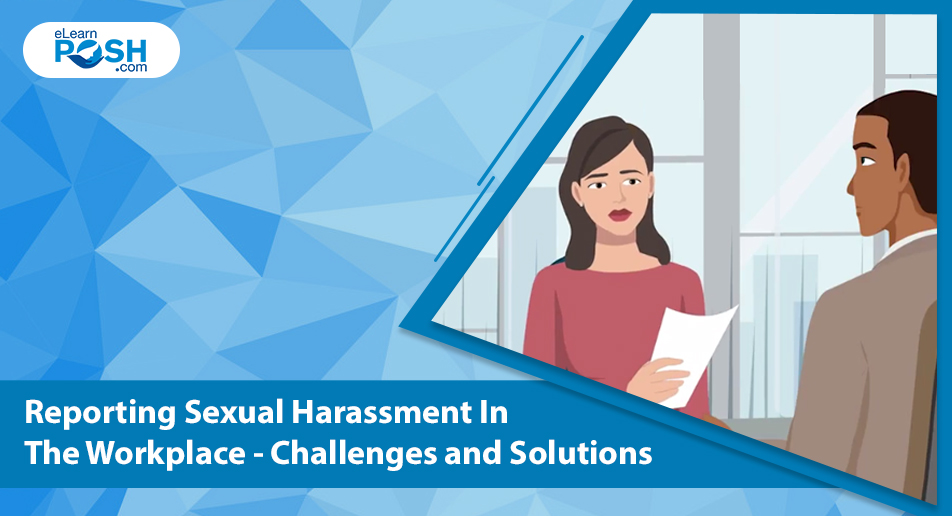 A news report published in 2013 says that women who speak up against sexual harassment are considered as troublemakers. They find it difficult to get a job if their potential employers get to know about the sexual harassment complaint they have filed. The report quoted a former employee of an accounting firm saying, “I may not have taken up the case had I known the repercussions”.

This was the condition before the Sexual Harassment of Women at Workplace (Prevention, Prohibition and Redressal) Act, 2013 was enacted. The Act has made it easy for women to file sexual harassment complaints. They do not have to be embroiled in the never-ending legal fights anymore. Even then, employees still hesitate to report sexual harassment at workplace for several reasons. In this blog, we will discuss the most common challenges employees face while reporting sexual harassment.

Difficult to differentiate between sexual harassment and other forms of harassment.

The biggest challenge employees face is with differentiating between sexual harassment and other forms of harassment. Many a time, employers receive complaints of general harassment from employees which have elements of sexual harassment in it (being teased about the body and alienated, for example). Employers are confused when they receive such complaints.

The immediate solution to this is to inform the complainant about her right under the Act and advice to submit the complaint to the Internal Committee (IC). As a representative of the management, the manger or HR upon receiving the complaint has the responsibility to convey their commitment towards safety of the women in the workplace. They should also assure confidentiality (to the extent possible) and protection from any form of retaliation.

An organization where employees fear to speak up loudly announces the need to have a deep analysis of the organization’s culture. An open culture that promotes communication is the ultimate solution to preventing any form of retaliation and the fear of retaliation.

Since the issue is also a result of lack of awareness, there may be a need to evaluate the frequency and quality of POSH training given to the employees as a part of POSH compliance. The reluctance to report can be an indicator of the ineffectiveness of the training. Feel free to check out our engaging and fully customizable eLearning courses on Prevention of Sexual Harassment.

Prevention of Sexual Harassment Law is not Gender-neutral

A major criticism POSH Act faced is that it is biased and aims only to address issues faced by women. In Indian context, where the power dynamics is imbalanced and women are the ones to face sexual harassment more often, the Act aims at protecting the rights of women and increase the presence of women in workplaces. The idea that the Act is biased is debatable.

Anyhow, the Act does not cover the redressal mechanism when an employee of any other gender is subjected to sexual harassment. This stops employees of other gender from reporting. What an organization can do to fill this gap is to implement a separate policy on sexual assault on all gender.

This will not come under the POSH Act, instead will be part of the service rules. The Internal Committee can still handle complaints from employees who are not women. For this, the IC should be vested with the power to do so according to the service rule. The IC and the employees can be trained on their rights and responsibilities towards a harassment-free work environment according to the gender-neutral policy as well.

POSH Law Lacks the Provision to deal with Anonymous Complaints

POSH Act clearly mentions that the person subjected to harassment or anyone who she authorises should submit a written complaint for the IC to investigate it. The organization has no obligation to address an anonymous complaint according to the Act. But what if addressing an anonymous complaint can prevent abhorrent behaviour by the accused in the future? This actually puts the management in a dilemmic situation.

As mentioned earlier, the reason for the complainant not coming to the forefront may be the fear of victimisation and retaliation. This again asks for a serious look into the openness of the workplace culture. Sensitisation and repeated assurances from the employer that the victim will not have to face repercussions are needed.

Anonymous complaints can still be investigated and redressed as a disciplinary issue to avoid any legal complications. After all, the Act is meant to create a safer workplace. Ignoring an incident that was brought to the notice of management is definitely not a good idea.

This blog has looked at the most common challenges in reporting sexual harassment. One of the most important steps to address these challenges is creating awareness among the employees through a comprehensive and regular POSH training. Creating a workplace culture that promotes equality and open communication is also equally important. Implementing them will not only encourage the victims to speak up but also discourage the perpetrators from committing offences. They are the two strong tools organizations possess to promote equality and safe workplace.