Contents hide
1 POSH Act, 2013: Inquiries and Absence of Evidence
1.1 Evidence is not a criterion for accepting complaints
1.2 Gather Available Evidence
1.3 Findings of the Inquiry 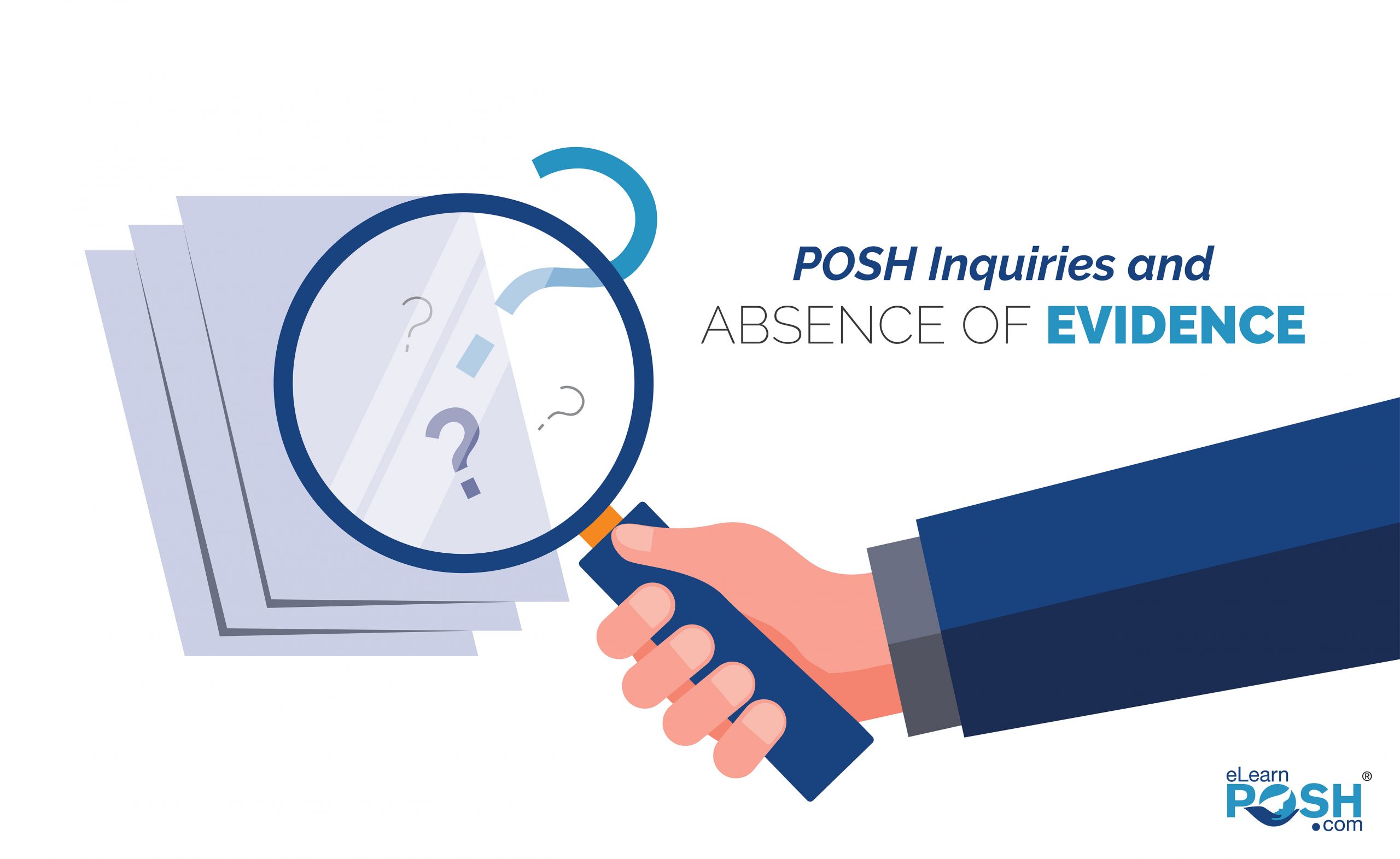 Since many acts of Sexual Harassment at workplace are not explicit and occur during one-one interactions, most of the times IC are confronted with the challenge of “absence of evidence and/or witnesses”.

How should the Internal Committee proceed in such situations?

We have put together some guidelines for the IC to handle sexual harassment complaints which do not have evidence and/or witness.

If you are new to sexual harassment inquiries as per the POSH Act or would like to refresh your memory about the same, this blog will help.

Evidence is not a criterion for accepting complaints

Considering the stigma attached to sexual harassment and the alienation victims experience, it requires a lot of strength to file a complaint. Therefore, IC should definitely appreciate the effort and treat the complainant respectfully. Since POSH Act makes “False Complaints” a punishable offence, the IC should clearly let the complainant know that inability to produce evidence does not amount to a case of “False Complaint”.

Remember that IC is responsible to inquire into every complaint it receives without any discrimination.

For some forms of sexual harassment, physical harassment for example, collecting tangible evidence like images or text messages is not easy.

At times when tangible evidence is absent and there are no witnesses for the incident, IC can rely on circumstantial evidence and indirect witnesses. Here are a few things IC can do:

Findings of the Inquiry

Based on all the information available, assess the probability for the incident to have taken place. If the circumstantial evidence suggests that there is more than fifty percent chance for the incident to have occurred, the IC can conclude that the respondent is guilty of sexual harassment and recommend appropriate actions against the respondent.

This is because the standard of proof used in sexual harassment inquiries by the Internal Committee is “preponderance of probabilities”.

In the case of Medha Kotwal Lele & Ors. V. Union of India And Others, 2012, the Honourable Supreme Court observed:

“The standard of proof is preponderance of probability and there is no need to establish the charge of sexual harassment beyond reasonable doubt as in a criminal proceeding. All that is necessary is that the inquiry must be conducted in a fair and transparent manner and in due compliance of the principles of natural justice, after giving full opportunity to the delinquent to defend his case.”

Upon the completion of the inquiry, if the available evidence does not suggest a fifty percent probability for the incident to have taken place, the respondent should be acquitted. The same needs to be communicated to the complainant respectfully. Inform the complainant that no action can be taken unless more evidence surfaces.

Internal Committee forms the pillar in an organisation’s mission to put an end to sexual harassment at workplace. Organizations must ensure that the Internal Committee is capable of fulfilling their responsibilities competently and delivering justice in every case they take up. Adequate POSH training that includes different scenarios, case studies and activities will definitely empower IC to discharge their responsibilities competently. At eLearnPOSH, we know very well that once-in-a year classroom training may not be sufficient and therefore, we have come up with a comprehensive POSH Training for IC Members. Check out eLearnPOSH’s Annual Subscription Program for IC members that includes more than 110 minutes of eLearning, three interactive webinars and many more features and tools.