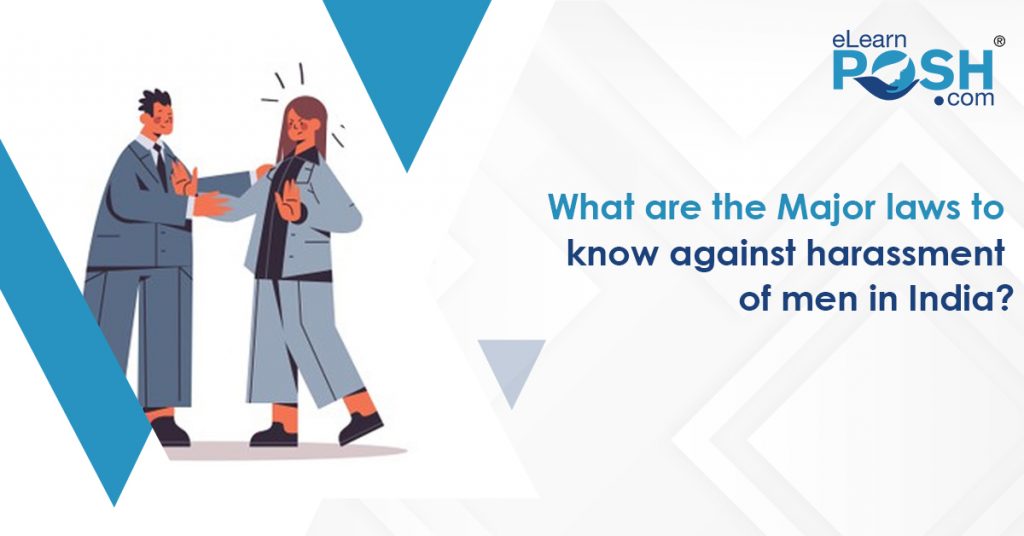 Due to the differences in cultural background, the availability of information and exposure, the understanding of the term sexual harassment is not the same for everyone. The afore-mentioned factors shape an individual’s view sexual harassment. What one person may perceive as sexual harassment will be reasonable behavior for another person. However, one thing that does not change is that anyone can be a victim of sexual harassment, regardless of the gender, may it be at a school, college,  office, home, coaching center, or anywhere else.

Are There No Laws That Protect Men from Sexual Harassment in India?

Other Reasons for Sexual Harassment Against Men to Go Unreported?

Apart from the lack of gender-neutral laws, most cases of sexual harassment against men inside and outside the workplace go unreported because of two reason:

What Can Organizations Do to Prevent Sexual Harassment Against Men?

Organizations can begin by making the Prevention of Sexual Harassment (POSH) Policy gender neutral. This way anyone who faces sexual harassment at workplace can file a complaint. Though the POSH Act itself is not gender neutral, it does not prevent an organization from having a gender-neutral POSH policy. Organizations that have a gender-neutral POSH policy can redress complaints received from employees of other genders using the organization’s Code of Conduct policy.

Sensitization and awareness creation is the other effective approach against sexual harassment prevention against men. Conduct frequent trainings that cover sexual harassment as a crime against people and not against women alone. Use the training to send a clear message that sexual harassment will not be tolerated irrespective of the gender and designation of the victim and perpetrator. Trainings should also mention the complaining mechanisms that are provided to male employees.

What Can Men Facing Sexual Harassment at The Workplace Do?

Some organizations will have a gender-neutral Prevention of Sexual Harassment (POSH) Policy that accepts complaint from anyone. In such organizations, men can report instances of sexual harassment and register complaints with the Human Resources department which will approach the issue as a violation of organization’s Code of Conduct policy. While this is not the same as legal action, it is a start toward putting an end to their experience.

How Can eLearnPOSH Help Organizations in Creating a Safe Environment?

Employee sensitization through sexual harassment prevention training and awareness creation are one of the most important steps organization can take to sexual harassment prevention at workplace. eLearnPOSH provides online POSH Training through interactive eLearning courses for organizations in Bangalore and all parts of India. We have the eLearning courses in 7 different regional languages like: Hindi, Marathi, Bengali, Kannada, Malayalam, Tamil and Telugu to cater to regional audience. We understand that organization’s requirements are unique and hence our trainings are fully customizable.

Our other POSH trainings include POSH for Manages , POSH for Internal Committee Members, POSH in Higher Educational Institutions and Protection of Children from Sexual Offences Act eLearning.