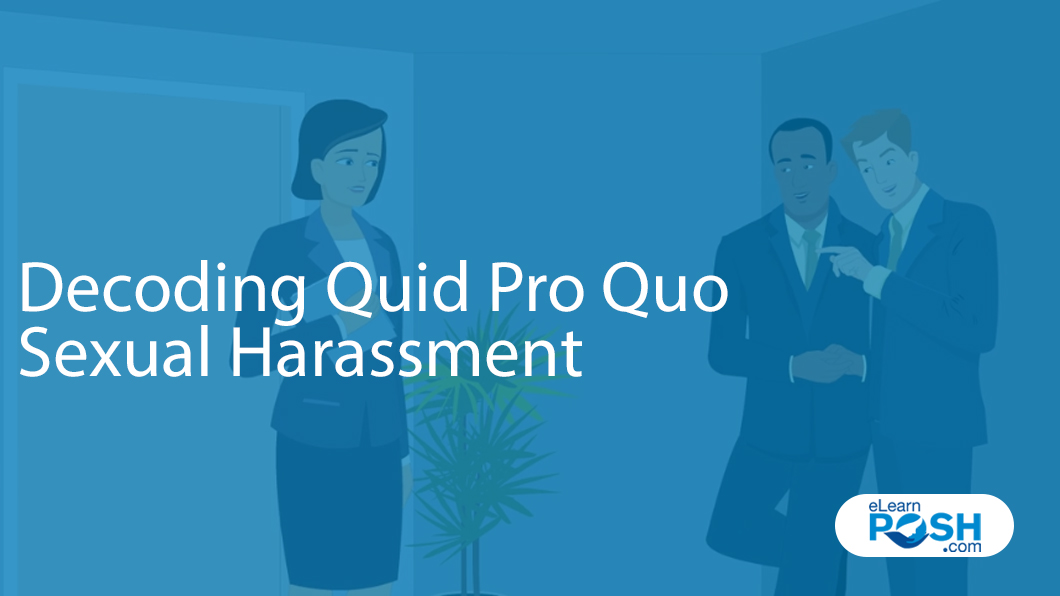 Alice has been in the organization for past three years and is expecting a promotion this year. She has spoken to her manager Suresh about this a few days ago and he seems to be happy to recommend her for the vacant post.

A few days later, however, Alice gets to know that a relatively new employee Anna, who Alice has trained for a while, got promoted to the vacant position. Alice suspects foul-play and complaints to the HR. HR, while speaking to Anna finds out that Suresh had offered to promote Anna if she was willing to offer sexual favours to him. Soon after Anna agreed, she was promoted.

Quid pro quo is a Latin term that loosely translates to “this for that”. In this form of sexual harassment, the harasser must have some form of supervisory authority over the harassed. This is because the underlying idea of quid pro quo is that an employment benefit is given in exchange for sexual favours.

Quid pro quo can also be in the form of an employee bearing the brunt of rejecting sexual favours in terms of employment decisions. Employment decisions usually involved (but not limited to) are hiring, termination, promotion, demotion, performance evaluations and decisions about compensation. The harassing behaviour can be verbal like a sexually offensive comment, physical like sexual advances or visual like being forced to watch offensive images.

For an incident to be counted as quid pro quo, there should be an employment decision involved, and the employee being subjected to unwanted sexual conduct from the supervisor or manager. It is difficult to prove whether the sexual conduct was unwanted. For this, the investigating team can investigate the behaviour of the supervisor and the employee around the situation. Has the supervisor placed similar offers to others in the organization? Has the victim mentioned about this to someone in the organization or whether the victim objected the behaviour but had to submit finally?

The primary challenge with investigating quid pro quo sexual harassment is that it can be very subtle and the likelihood of victim complaining is less. This is either because the employee is benefited out of it or fears retaliation. In most cases of quid pro quo, there is an implied threat of losing the job. Obtaining evidences can also be difficult because nobody but the two parties are aware of the incident.

Click here to check our video on Quid pro quo.

An ill effect of quid pro quo is that it is not only that the victim is harassed, but other employees are being discriminated too. In the example we discussed above, Alice did not get the promotion she thoroughly deserved.

Since quid pro quo is difficult to spot because most of them go unreported, here are a few signs that the Internal Committee (IC) members and HRs can watch out for. 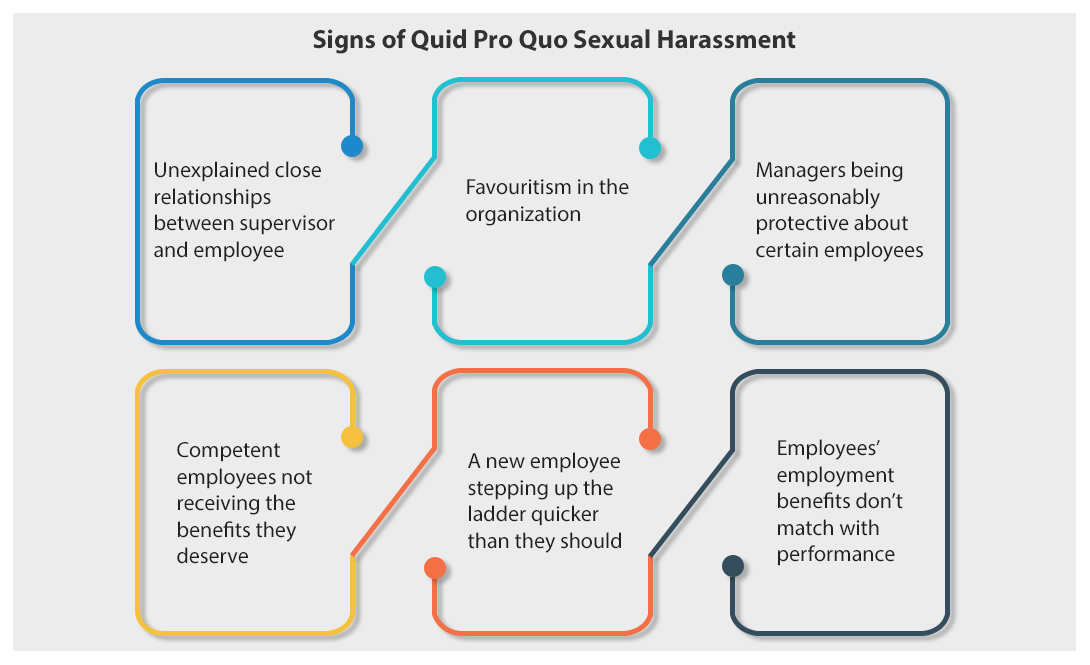 Subtle nature of quid pro quo makes it difficult to notice, investigate and act against. In addition, there can be times when IC members will have to investigate into an incident without a formal complaint. Only well-trained IC members will be able to read between lines while interviewing witnesses, complainants, and respondents. The responsibility of IC members in ensuring equality in an organization cannot be emphasized more. Hence it is important to ensure that IC members undergo thorough POSH training regularly to ensure the effectiveness of the Internal Committee. Check out our eLearning course for IC members.

To read about the other category (Hostile Work Environment) of Sexual Harassment, click here