Contents hide
1 Can Character of the Complainant matter?
1.1 POSH Law and Complainant’s Character 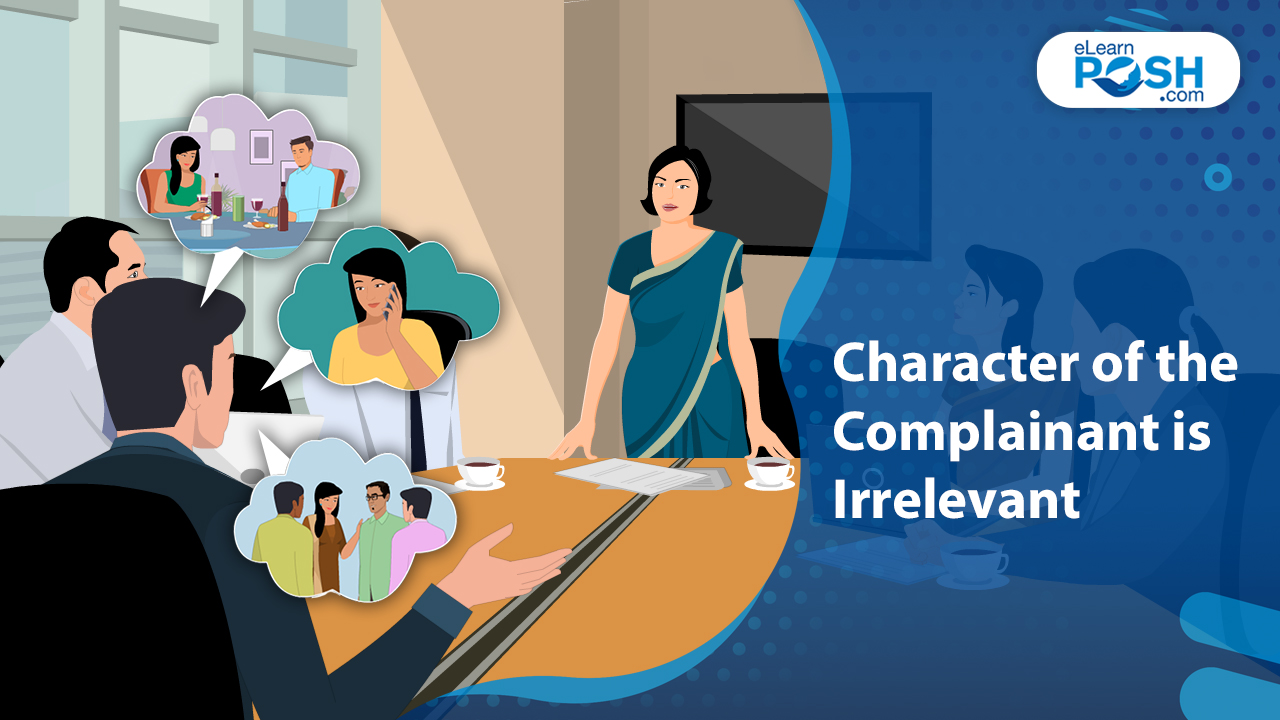 Can Character of the Complainant matter?

Gopika is a fun loving and outgoing Marketing Executive. She likes to dress herself in western clothes which is considered provocative by many of her colleagues with conservative mindset. Not just that, she is well known among her male colleagues for having an open sexual attitude.

Ranjan, a good-looking Marketing Manager who works closely with Gopika finds it okay to proposition to her. Despite his requests being turned down couple of times, Ranjan makes another attempt. Irked by Ranjan’s behavior, Gopika files a sexual harassment complaint.

When the IC members call Ranjan for inquiry, he shows no regret and justifies his actions by saying “I did no crime. It is true that I propositioned but did not misbehave with her. Everyone in the Marketing team knows about her character. Her promiscuity is well known. Even her dressing is very provocative and inviting. So, why is my action considered sexual harassment? I have worked for 10 years in this organization and have worked with several women. There was never a sexual harassment complaint against me.”

What do you think about Ranjan’s statements? Should the action against Ranjan be reduced to only a warning because Gopika has “questionable morals”? What does the POSH Act say about provocative dressing and open attitude to sex?

Continue reading to know how the Internal Committee of Internal (IC) Complaints Committee (ICC) should handle a complaint like this?

POSH Act does not explicitly specify anything related to promiscuity and provocative dressing. However, one must remember that ‘promiscuous character’ of a woman or provocative dressing is irrelevant even in rape cases and a rapist cannot take the woman’s character as a ground of defence. We have several judgments from our honourable Supreme Court which support that every woman, regardless of her life choices has the right to refuse sexual advances from a person. The same principle applies to all sexual harassment cases.

The lifestyle that a woman chooses for herself is her personal decision and irrespective of her lifestyle, she still has the right to refuse sexual advances by a person. None can use her lifestyle as an excuse to sexually harass her or as a weapon to undermine the credibility of her complaint. Statements like “She has a lot of boyfriends”, or “She is a woman of easy virtue” are not excuses for sexual harassment. Bottom line is that sexual harassment is illegal and character of the lady allows no excuse to the respondent. Moreover, sexual harassment can leave a strong negative impact on the conscience and self-esteem of the complainant resulting in long-lasting trauma.

Feel free to contact us for an effective and comprehensive POSH training.

In the light of the above, it is very clear that neither Ranjan nor the ICC members should even consider Gopika’s character. The ICC should ensure that the character of the complainant or the way she dresses has no impact on its decision making. They also should take extreme caution to ensure that unconscious bias does not get into the way of investigation, documentation or the recommendations to the employer.  As long as the complainant is able to produce solid evidence, nothing else should matter. Considering this, the ICC cannot let go of Ranjan with just a warning. Thorough inquiry must be conducted and Ranjan, if found guilty of sexual harassment must be punished appropriately.

Additionally, employer should reiterate this topic during the regular POSH training. This is important to prevent the respondent from using lack of awareness as an excuse. Finally, ensure that the POSH training is conducted frequently, at least twice in a year, to reinforce the importance of creating a safe harassment-free workplace.

Get answers and FREE consultations for all your POSH related queries. Click here Join our ‘Not-for-profit’ LinkedIn group.